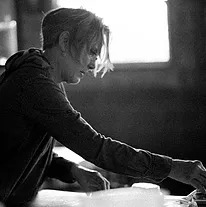 At 17, Monica Pope told a swimmer friend she was going to open a restaurant and change the way Houston eats, and she’s done just that. Monica believes that local food is healthier and healing, truly alive with flavor, nutrition and story.

Monica attended Goucher College in Baltimore, Maryland, and then travelled the world for almost 10 years. While waylaid in London, she attended and graduated from the Prue Leith School of Food & Wine. She returned to the U.S. by way of San Francisco, having worked for two years in three kitchens, and left in 1989, narrowly missing the big earthquake.

Since then, she has opened many groundbreaking restaurants in Houston, beginning in 1992 with The Quilted Toque. In 1994, she opened Boulevard Bistrot, and was voted one of the Top Ten Best New Chefs by Food & Wine in 1996. She opened t’afia in 2004 where she also hosted the Midtown Farmers Market and in 2007, Monica was nominated for a James Beard Award/Southwest region. In 2010, she was a contestant on Bravo’s Top Chef Masters.

Monica is the founding chef of Recipe4Success and I’ll Have What She’s Having. She also collaborates with Ali Miller on Food As Medicine and Maria Merrill on a kid’s Campcraft that connects kids to cooking, creative thinking and writing. Her driving philosophy was and still is to eat where your food lives.

Her life’s focus is bringing people together — teaching food as medicine and cooking as therapy. Hence, her newest collaboration with Thera Kids Associates where she will be co-teaching social learning skills through cooking, creativity and connection. She is also happy to provide family classes upon request.

*Please do not include confidential information in your message. One of our professionals will respond within 48 hours.